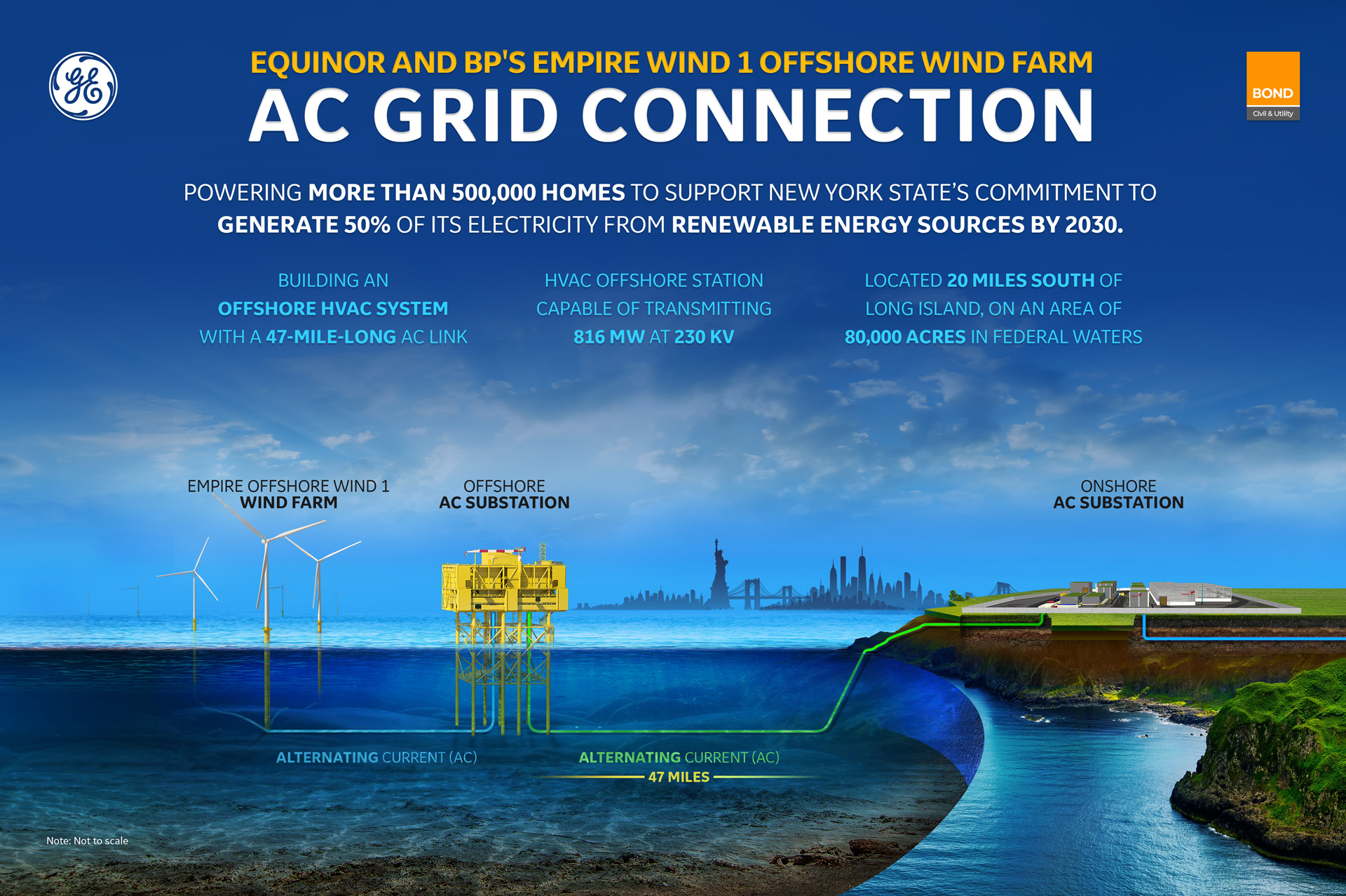 Empire Wind 1 is planned for an area of 80,000 acres, in federal waters, an average of 20 miles south of Long Island, east of the Rockaways. Once operational, it will power more than 500,000 New York homes. Project partners conducted local community outreach to ensure a collaborative and transparent construction process, share information about local job opportunities, and establish trusted working relationships with all stakeholders and front-line communities, and will continue to do so throughout the construction process.

The GE-BOND consortium led by GE’s Grid Solutions will be responsible for delivering the onshore substation and interconnection cable in Brooklyn, New York City, on an EPC basis, as well as designing and supplying the high-voltage electrical systems for the offshore substation. Engaged with Equinor since the Pre-FEED phase (Pre- Front End Engineering Design), GE’s AC Systems Group coordinated the implementation of digital substations including advanced digital monitoring, controls, and software systems, GE will provide the critical connection and power balance needed between the offshore wind farm and the point of interconnection to the NY electrical grid. BOND Civil & Utility will be responsible for all aspects of construction of the onshore substation and interconnection cable, site restoration, and high voltage electric equipment installation for the South Brooklyn Marine Terminal (SBMT) substation. Development of the onshore and offshore substations will start this year, with construction expected to begin during the second half of 2023.

GE’s Grid Solutions and BOND Civil and Utility plan to open a project office in Brooklyn, NYC that will host the complete project teams. GE and BOND are also committed to give opportunities to New York based suppliers and contractors to be part of this exciting project.

The Brooklyn terminal will serve as a hub for Equinor and bp’s Empire Wind and Beacon Wind projects that will supply 3.3 gigawatts (GWs) of energy—enough to power nearly two million New York homes. The complex will be transformed into a major staging and assembly facility for the industry, as well as a long-term operations and maintenance base. Equinor recently announced a New York project office located in Sunset Park, Brooklyn, opposite the South Brooklyn Marine Terminal.

“This contract award marks another big step for the Empire Wind project. Through this commitment we will continue to advance this flagship offshore wind development, generating local jobs and shaping the growth of this industry. Together with our partner bp, Equinor will deliver homegrown, renewable energy to New York households, making a substantial contribution to the New York state’s leading climate ambitions,” says Siri Espedal Kindem, president of Equinor Wind US.

“As the consortium leader for the Empire Wind 1 EPC contract, we are excited to move ahead with this landmark project,” said Johan Bindele, AC Systems Business Leader at GE’s Grid Solutions. “The award of Empire Wind 1 is testimony to our leadership and expertise of our AC Systems Project Group in North America and its ability of integrating turnkey high voltage electrical systems for the alternating current (AC) offshore market to help accelerate the energy transition in the US. Over the past 15 years, GE has been awarded significant contracts to deliver high-voltage AC systems for 18 offshore wind projects, connecting 5 GW of offshore wind farms. I would like to thank our partner BOND Civil & Utility Construction for their dedication and collaboration over the last three years to develop and optimize the technical solution that enabled us to secure this major deal.”

Kane Cuddy, President, BOND Civil & Utility Construction, said: “We are thrilled with Equinor and bp’s vote of confidence in BOND Civil & Utility’s capabilities to execute on the Empire Wind 1 project. We look forward to bringing over a century of experience in generation, transmission, and distribution construction to ensure clean energy delivery to customers and working with GE’s Grid Solutions on this state-of-the-art substation and major renewable energy project to help New York State meet its ambitious clean energy and climate goals.”

BOND Civil & Utility has been a leading building, civil, utility and energy construction firm for over a century in New England, the Northeast, and the Mid-Atlantic, and has served as a pioneer in the construction of underground electric transmission and distribution systems for some of the largest utility companies in the Northeast. As a full-service, self-performing civil and utility contractor, and a Top 25 Utility Contractor in New York City, BOND Civil & Utility has constructed over 60 miles of underground transmission electrical lines, as well as both Brownfield and Greenfield GIS and AIS substation projects, across nine states throughout New England and the Mid-Atlantic. BOND Civil & Utility established a New York headquarters in the Bronx, New York City in 2015, operates in all five boroughs and employs over 100 local employees.